TERI RUEB is an artist whose work combines sound and site using mobile media. She is known for having established the form of GPS-based interactive installations, sometimes referred to as "locative media", as early as 1997. Her works have received awards including a 2008 Prix Ars Electronica Award of Distinction in the Digital Musics category.

She is the recipient of numerous grants and commissions from international institutions including the Isabella Stewart Gardner Museum, La Panacee, the Arnold Arboretum, Edith Russ Site for New Media, The Banff Center for the Arts, the Boston ICA / Vita Brevis Temporary Art Program, Santa Fe Art Institute, Artslink, Turbulence.org, and various State Arts Councils. She has lectured and presented her work worldwide at venues including Ars Electronica, ISEA, SIGGRAPH, Transmediale, The New Museum of Contemporary Art, Kiasma Museum, and IRCAM. She has been nominated for numerous awards including the CalArts Alpert Award, Rockefeller New Media Fellowships, and the Boston ICA Foster Prize.

Rueb completed her doctoral degree at the Harvard University Graduate School of Design in 2011 where her research addressed constructions of landscape and subjectivity in mobile network culture.

Rueb is Professor of Media Study (with an affiliate appointment in the Department of Architecture and Urban Planning) at the University at Buffalo (State University of New York) where she founded and directs the Open Air Institute, a platform for field-based learning and collaboration at the intersection of media, ecology, and culture. 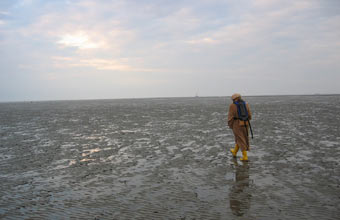